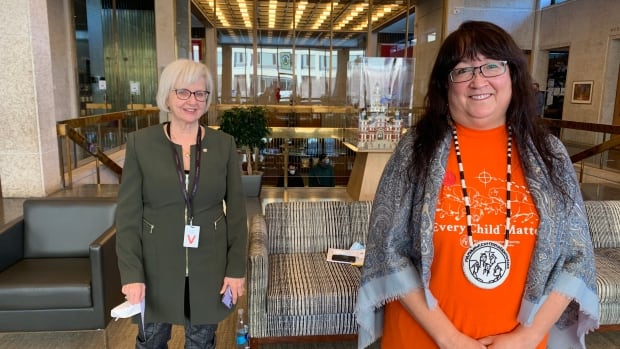 Sex workers, advocates at odds over getting escorts and body rub licenses

Advocates for victims of human trafficking applaud a report presented to city council, while some sex workers warn it could cause harm.

The motion presented to the Policy Executive Committee on Wednesday recommends the city repeal its licenses for adult-oriented businesses, including escort agencies and body massage practitioners.

Currently, the city has 31 licenses with different businesses, which bring in $23,058 per year. If city council adopted the report, Winnipeg would no longer get any license fee money.

“These companies are vehicles for horrific abuse of women and girls,” Joy Smith told the committee. The longtime advocate for victims of human trafficking called the report a “game changer”.

“It’s time to take a stand and say, here in Winnipeg, we will not allow our children to be victimized, bought and sold,” she said.

The report recommends repealing licenses – it does not detail business closures. But some who have chosen to work in the sex industry say it is a slippery slope to push sex workers into more dangerous situations.

“We’re just worried about the surveillance and our safety,” said a 30-year-old Winnipeg woman who is a sex worker and goes by the pseudonym Emma. She is a member of the Sex Workers of Winnipeg Action Coalition and spoke to CBC News after the meeting.

“Removing the licenses, if that means they’re finally trying to shut down a safe working environment, then that’s a really scary thing. I don’t know where it’s going to go, but we’ve seen it elsewhere. It doesn’t help anybody.”

Emma said she didn’t think enough sex workers were consulted for the report. Overall, however, she hopes councilors can tell the difference between those who choose to be sex workers and those who are exploited.

“Sex workers are consenting adults. You can only have sex work consensually. Otherwise it’s trafficking exploitation,” she said.

“These two things have to be very separate. We want to operate like ordinary businesses.”

“The ban does not make sex work safer or make it go away,” she told the committee, adding that councilors must consider harm reduction for sex workers in their policies. .

But the vote was a big win for Diane Redsky. The executive director of the Ma Mawi Wi Chi Itata Center said removing licenses from such businesses will help protect indigenous women and girls who are at greater risk of harm or exploitation.

“These places are places where they are sexually assaulted, sexually exploited and financially exploited,” Redsky told CBC after the meeting. “This is the true reality of what we see as a service provider that has been working on this issue for over 20 years now.”

She said you can’t separate sex work from exploitation if you really want to help those who are taken advantage of.

“Any form of legitimization of the sex industry will lead to increased sexual exploitation of vulnerable people,” she told CBC News after the meeting.

“It works on the same business principles of supply and demand. You have to have supply because the demand is there for sexually exploited women and girls. vulnerable who need to be victimized.”

The Policy Executive Committee unanimously approved four of the report’s five recommendations. The outlier was a recommendation to create a partnership between the National Human Trafficking Education Center and the taxi service industry.

Some advisers said it was too narrow and more could be done on that front. The committee voted 4 to 3 against this recommendation. The report goes to city council next week.

Identity Theft at Tax Time: How to Protect Your Refund

Digital health can be a catalyst for greater equity

India Canada FTA Are we on the right track

Average rent in Canada up nearly 12% year over year: report